Members of the Ebonyi State chapter of the Labour Party (LP) have called out to the party’s presidential candidate, Mr. Peter Gregory Onwubuasi Obi, to come to the rescue of the party ahead of the 2023 general elections.

This was contained in two separate SOS for urgent intervention to save the state chapter, signed by the LP House of Representatives Aspirant for Ezza North-Ishielu Federal Constituency, Dr. Peter Okey, and the state chairman and gubernatorial candidate of the party, Comrade Splendour Oko Eze.

In the first letter, Dr. Okey, an NHS Consultant Psychiatrist (UK) and Member of medics4PeterObi in Diaspora, as well as a member of Peter Obi Support Network (POSN), noted that the party has not been active despite being in existence in Ebonyi State for a while.

“Luckily, the party managed to conduct party primaries in May 2022 in line with the guidelines of the Independent National Electoral Commission (INEC).

“This was through the hard work of the state party executives led by the chairman, Mr Splendour Eze.

“Incidentally, Mr Eze also emerged as the gubernatorial candidate of the party and filled all National and State Assembly slots with the so-called ‘placeholders’,” the “Obi-Dient” NHS Consultant Psychiatrist wrote.

According to him, there are two faction of Labour Party chairmen; the first chairman that conducted the primaries was replaced after just one month of his tenure in office with another chairman.

The replaced party chairman happened to be the Ebonyi State gubernatorial place holder but after he was replaced, he refused to withdraw his position as the place holder for the candidate.

See the attached letter to INEC below: 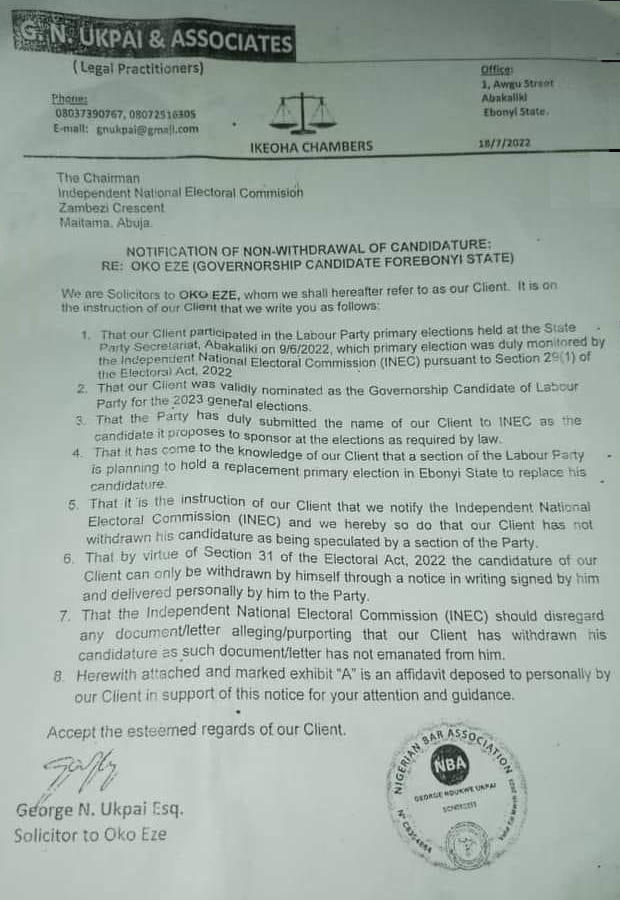 Eventually, the party conducted another primary and Arc. Edward Nkwegu (aka EDON) emerged the winner throwing up a whole new set of gamut in the party’s hierarchy.

He, thereby, urged the former Anambra State Governor to call the actors in order, praying that the support groups should use their power to ensure stability in the State Labour party to avoid disaster in the near future.

This, he noted, will help to avoid duplications of candidates in one position that will cause division and court cases in near future.

On the impact of Peter Obi, he stated:

“As it is in all other states in Nigeria, following the entry of H.E to LP and the conclusion of party primaries of other political parties in Ebonyi State, there has been many interested parties wanting to contest various positions under LP.

“For the governorship, two major contenders are Engr. Fidelis Nwankwo and Arc. Edward Nkwegu. Fidelis came from PDP while Edward came from APC. This issue has divided the party in Ebonyi into 2 factions, each with their own loyalists.”

Identifying the underlying problem, he said:

“This is wrong in different fronts. First the termination of Mr Eze as the state chairman without properly consulting with him is wrong and seen to be unfair.

“Secondly, the state chairman traditionally should come from another senatorial zone.

“Finally, since Mr Eze was able to hold the party during the troubled times and was able to conduct primaries and filled all slots with placeholders, he deserved to be given some credits.

“The current situation is that Mr Eze is the guber candidate of the party (recognised by INEC) and he has not ‘withdrawn’ his candidacy to pave way for a fresh primary election.

“His reason is that he wants Mr Nkwegu and Mr Nwankwo to reconcile first and to consider which of the candidates is more likely to be able to win election.

“However, Mr Edward and his faction have purportedly gone ahead to conduct primary election and declared himself as ‘unopposed’.

“This is visibly illegal because section 33 of the Electoral Act is clear that a candidate submitted to INEC must die or withdraw before a fresh primary for substitution can take place.

“So, it is either Mr. Edward and his team are faking withdrawal letters or they are simply embarking in an exercise that is futility.

“On the other hand, Mr Eze has gone to court to assert his right as the guber candidate of the party to make it clear that he has not withdrawn his candidacy. The same situation applies to national assembly positions.

“Given the fast approaching INEC deadlines, there is real risks that if these issues are not resolved now, LP may not have candidates in Ebonyi State since the current candidates listed by INEC are all placeholders.

“I am also concerned that these irresponsible behaviours of these party people in Ebonyi State runs against the message of fresh air, integrity, credibility and transparency in our system.

“Finally, there is also concern that other politicians including the governor of Ebonyi State may be using some people to foster disunity within LP in Ebonyi State.

“I am therefore calling on HE to give attention to the situation in Ebonyi State by calling the 2 factions together as a matter of urgency,” he concluded.

The second part will deal with the position of the state chairman and gubernatorial candidate of the party, Comrade Splendour Eze.

(If you would like to receive CURRENT NEWS updates from News Band on WhatsApp, join here; for Telegram, join here. If the group is full, send WhatsApp/Telegram message to +234 905 038 2526. You can also send eyewitness accounts/reports/articles to elstimmy@gmail.com; follow us on twitter @News Band; like our Facebook page: News Band.)