Despite denials by top officials of the administration, the Presidency indeed moved against Christian religious activities within the precincts of the Aso Rock presidential

villa, and plans to relocate the Aso Villa Chapel.

Presidency officials prevented choristers from entering the building for their weekly rehearsal on Saturday, August 29, 2015 and actually stopped the use of the facility by Christian worshipers on August 30, 2015.

The presidency had on 6th September 2015 denied Elombah.com reports that President Muhammadu Buhari has closed down the Aso Villa Chapel, which is close to his official residence.

In refuting the publications, the Presidency shared photos from the Sunday church service to validate its claim.

However, indications emerged last night that despite denials by the administration, the Presidency is under heavy pressure to relocate the Villa Chapel, where Christians have been worshiping on Sundays.

The location of the Villa Chapel, which was built and inaugurated by President Olusegun Obasanjo, is said to be too close to Buhari’s bedroom and kitchen and informed Presidency sources are of the opinion that it must give way.

Elombah.com has learnt that some overzealous aides of President Buhari were uncomfortable with the location of the church and indeed stopped the use of the facility by Christian worshippers on August 30, 2015, thereby causing a national uproar in the process.

According to a Vanguard Newspaper report, a source in the Presidency confirmed that  security agents prevented the Villa Chapel choristers from entering the building for their weekly rehearsal on Saturday, August 29, 2015.

According to the source, the plot was to erect canopies and have the church service there but the plan soon leaked and the Vice President, Prof Yemi Osinbajo, had to intervene by reaching out to President Buhari before the security men gave way for service to be conducted that day.

The Presidency source said: “Osinbajo was uncomfortable with the plan and he had to reach out to the President before service could be held that day in the chapel.”

It was learnt last night as prelude to relocating the Chapel, the Children’s church, which forms part of the Villa Chapel, has been shut and some rooms, converted to shops for storing food items.

Findings by Vanguard showed that as a result of the closure of the children’s church, the children were forced to relocate to the office of the Chaplain, Seyi Malomo, for their normal service.

“As a result of the unforeseen development, we had to collapse some facilities to accommodate the children and keep our worship going.”

That was why the Chaplain said that the church had not been shut but ‘we only had some procedural issues that needed to be sorted out’.

Findings by Vanguard show that unlike Obasanjo who deliberately built the church to be close to his official residence so that he could enjoy worship and prayers from the comfort of his bedroom, the same would not apply to the new president, who is of a different faith. 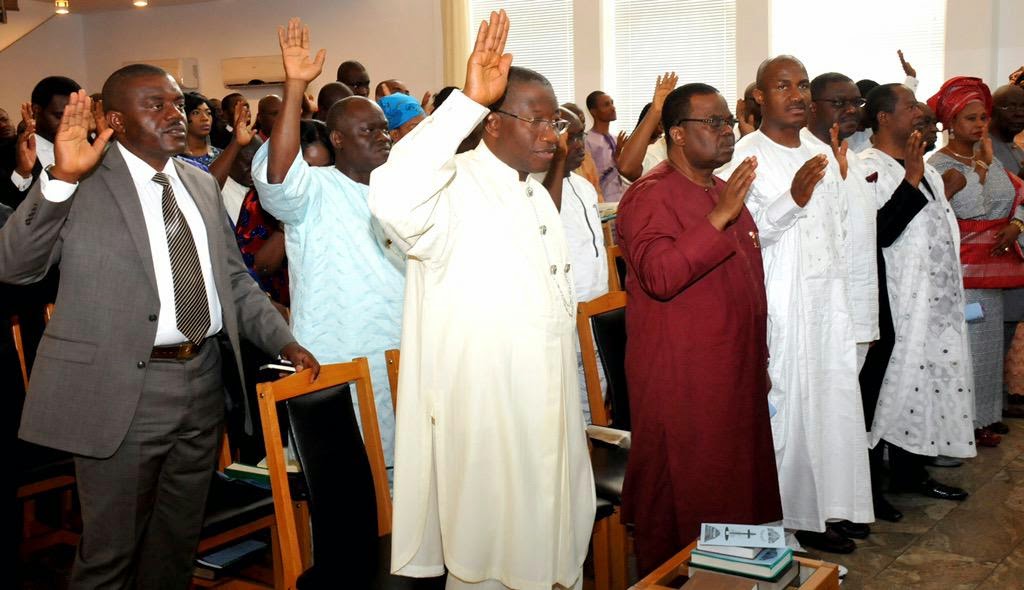 Competent sources told Vanguard that the late President Umaru Yar’Adua, who inherited the Villa chapel from Obasanjo, had assured his predecessor that he would not relocate it despite its proximity to his residence.

However the Special Adviser to the President on Media and Publicity, Mr Femi Adesina has denied the closure of the church by the Presidency.

Last week, when the issue came up, Adesina, quickly posted pictures of the church service on his Facebook.

Similarly, the acting Chaplain of the Aso Villa Chapel, Pastor Joseph Sheyi Malomo also said that the church was not shut but did not make mention of the fact that his office was being used in the place of the shut children’s church.

Malomo merely admitted that there were some procedural issues on August 30, 2015 that needed to be sorted out, but did not say what they were.

Vanguard stated that the Presidency is considering relocating both the Mosque and the Church from their present locations to a more spacious area in the Villa so as to prevent any accusation of partiality.