NSITF boss—Akabogu fires back at ‘faceless attackers, buccaneers’ who want him out for “business as usual”

The Managing Director and Chief Executive Officer of the Nigeria Social Insurance Trust Fund (NSITF), Dr. Michael Akabogu, has fired salvo at those he termed “faceless attackers and buccaneers within and outside the fund who want him out of the way so that business as usual will thrive”.

Dr. Akabogu made the remarks in a press release following a series of unsavoury publications claiming that he is involved in fake National Youth Service Corp (NYSC) certificate scandal, and ‘not qualified to take up the position of NSITF Managing Director ab-initio’.

In the statement entitled “NSITF boss, Dr Akabogu fires back at what he called faceless attackers and buccaneers within and outside the fund who want him out of the way so that business as usual will thrive“, the NSITF boss warned that Nigerians will be shocked if and when he chooses to indict the buccaneers outside the NSITF and their collaborators working within who are using trumped up allegations to get him out of the way.

The statement reads in full:

“I have been reading all the attacks sponsored by faceless persons against me in the mainstream and social media. I wish them well but I have a short message also.

Nigerians will be shocked the day I open my mouth on the reasons the buccaneers outside the NSITF and their collaborators working in the fund are using trumped up allegation on the National Youth Service Corps (NYSC) to malign my hard-earned credibility.

As a matter of fact, for the records, I graduated from the Federal University of Technology, Owerri, in 1991. My registration number is 86J/01232/A. I was called up same year for the 1991/92 Service year. My call-up number is FUT/91/23402 while my registration code at the Ogun State Sagamu camp is OG/91/0903, my primary assignment at University of Agriculture (UNAB), Abeokuta.

The following persons were some of my fellow corps members and I’m sure they are alive and gainfully employed in their various endeavours:

In 2021, the Minister of labour and Employment, Senator Chris Ngige recommended me and other members of the present management team to the President as officers who are capable of leading the fund, reform it and stop the massive looting that had become synonymous with NSITF.

Our biggest advantage is that having been staff of the agency, we know where the problems are, where the loopholes have been and how to plug them. I’m happy I have faithfully discharged my duties to the NSITF in line with the mandate given to us by Mr. President.

What is happening today is that these buccaneer looters, who present themselves as contractors and their collaborators inside the NSITF who are bitter that Akabogu stand in their way, are desperate to ease me out by scandalising my name in the media so as to continue the looting.

I will stop here. You guys are reporters, go and do your investigations. Use your undercover reporters to investigate, even enquire from NSITF staff about what I have said. My hands are clean.

They can continue with the trash they sponsor against me in the papers and social media but as far as I remain the managing Director, I will keep making things difficult for looters. That is the mandate the President and the Minister of labour gave me when I was sworn in.

See below some photos of Akabogu’s good old days at NYSC camp and his graduation ceremony: 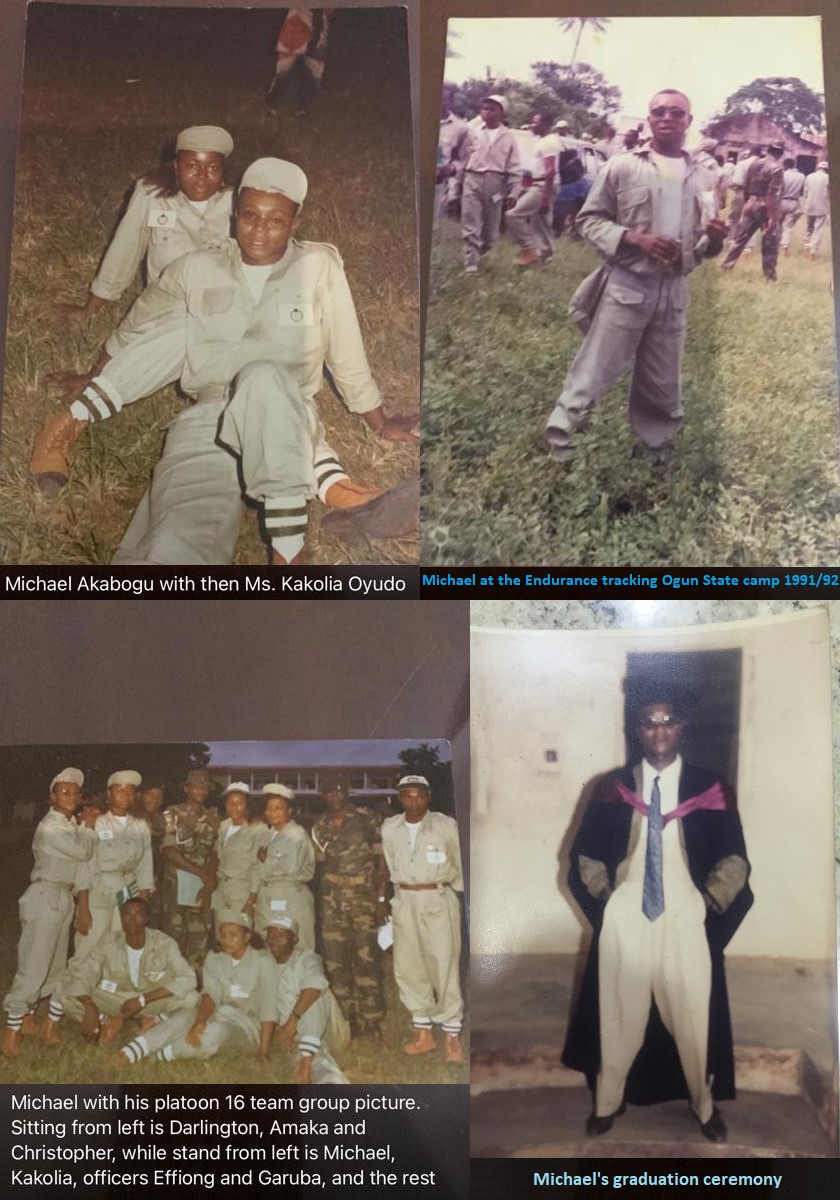 Policemen disarmed by unknown gunmen cry out over prolonged…

Policemen disarmed by unknown gunmen cry out over prolonged detention