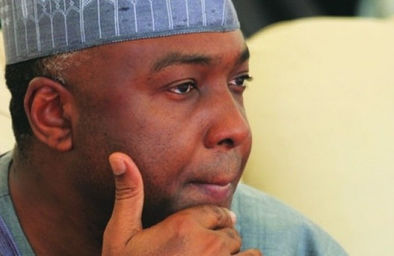 on Ethics, Privileges and Public Petitions has divided Pro-Saraki camp.

The PDP caucus in the Senate had kicked against the exercise in Press statement issued by the leadership of caucus on Monday.

However, fielding questions from newsmen, the Senate leader, Ali Ndume said: “I think there were some procedural lapses there, but I don’t want to believe it was deliberate because there is no way you can cut corners or use the institution of the senate to settle personal scores, it doesn’t work that way.

“After all, whatever decision you take has to be considered on the floor of the Senate and it has to be passed. So even if it is a committee recommendation, after the committee works, the report has to be presented in plenary and a simple majority will have to agree with its content before the report becomes acceptable.

“As you must have observed, I’m not used to talking about these issues; because the end justifies the means. So, if you go and make noise all over, you should know all that noise will have to be accepted by the majority of the senate before it becomes anything. So even if the committee does the work and the senate rejects it, that’s the end of the report. So, why make an issue out of it?”

He however called on journalists and Nigerians generally, to help the senate and by extension, the National Assembly in concentrating on developmental issues through discussion of ideas and not events or controversial issues.

He said: Like I keep saying, let us concentrate on ideas and things that will make this country work. These are trivialities. They do not add value to governance and the way Nigeria is. Issues like this can generate this type of opinions. Everyone is entitled to their opinion. But like I said, we observed some procedural errors and we will take appropriate steps to correct the lapses”.

He debunked recent report made in some of the national dailies, that he led some other principal officers of the Senate to the Villa to beg President Mohammadu Buhari for needed recognition of the leadership of the 8th Senate by the Presidency, saying he has always been visiting President Buhari and Asiwaju Bola Ahmed Tinubu in personal capacity ever before the forming of the All Progressives Congress (APC) as a party.

“My going to villa is not supposed to be a big deal. Yes, there are some issues we had after the inauguration of the senate leadership and all that, but as you can see we have put all those issues behind and moving forward.

“The president has communicated several times to the senate, who did he address the letter to? He writes not only the senate president, but he puts Bukola Saraki. We have moved beyond that. Of course I go to the villa frequently, because we compare notes on bills that are going to come including on these relationships. Senators are even on personal level supposed to be interacting with the president we have been doing that in the previous leadership and that is what took us there, and of course to improve on the relationship.

“And another paper reported yesterday when I was seen at Asiwaju’s place. Asiwaju is one of my mentors and of course, the president, too. I have two political mentors: the President and Asiwaju himself. We’ve been with this president hoping for his presidency from 2003 in APP before it became ANPP. So, I’m not a stranger to Buhari. I’ve been visiting him in Kaduna over the years in fact, for the past twelve years. So, my going to villa is not a new thing and so also is my visit to Tinubu. He’s one of the people I respect and appreciate. During his sixtieth birthday, he invited sixty people that were close to him and I was one of them”

What Is Killing The Nigerian Ambassadors “Before” Their Time?