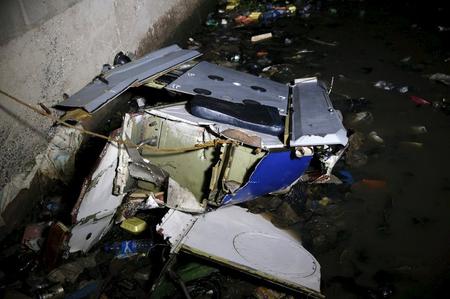 The helicopter operated by offshore energy transportation specialists Bristow Group, flying from an oil rig, crashed at around 3.30 p.m. (1430 GMT) in the Oworonshoki area of the city, shortly before it was due to land.

A rescue operation was continuing.

“We were watching the helicopter swaying in the air. And then it started to go down. As soon as it hit the water, we saw flames,” said Nkoli Moka, who watched the crash from a car on the city’s Third Mainland bridge.

“Four bodies have been recovered. Six people survived and two people are missing,” said Fan Ndubuoke, a spokesman for the NCAA. The aircraft had been carrying 10 passengers and two crew.

that one of its helicopters was involved in an accident … on approach to the Murtala Muhammed International Airport at Lagos, Nigeria,” said the company in a statement.

“The aircraft, a Sikorsky S-76C+, was returning from a drilling rig offshore,” it said.

At least 6 killed in Boko Haram attack near Maiduguri