Spike’s Tactical is marketing an assault rifle it claims was “designed to never be used by Muslim terrorists.” The AR-15 assault rifle is laser-etched on one side with

a Knights Templar Long Cross – a symbol of the Christian Crusades to reclaim the Holy Land from Muslims – and Psalm 144:1 on the other side: “Blessed be the Lord my Rock, who trains my hands for war, my fingers for battle.”

The company’s spokesman, former Navy SEAL Ben “Mookie” Thomas said he came up with the idea and believes no devout Muslim would touch such a weapon. 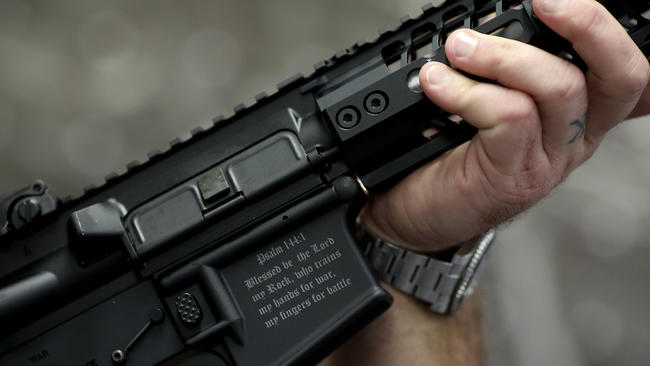 “Off the cuff I said I’d like to have a gun that if a Muslim terrorist picked it up a bolt of lightning would hit and knock him dead,” Thomas said.

Dubbed the “Crusader,” the weapon went on sale Wednesday and received immediate condemnation from the Council on American-Islamic Relations of Florida.

“Is it designed for Christian terrorists?” asked Hasan Shibly, executive director of CAIR-FL, who said out of 205 mass killings so far this year in the U.S. only one involved a Muslim. “We need to have a conversation on gun violence. There has been utter silence from gun manufacturers. It’s time for them to stop trying to make a buck on this.”

Shibly said he would welcome an opportunity to speak with Thomas as CAIR-FL opposes all forms of religious extremism.

“They don’t have to do outlandish things for us to engage them,” Shibly said. Spike’s Tactical of Apopka is marketing an assault rifle “designed to never be used by Muslim terrorists.”

The owners of Spike Tactical did not intend to insult or antagonize Muslims, Thomas said. They believe America and much of the world is threatened by Islamic terrorism and the Crusader is a symbol of shared Christian values and the right to defend themselves, he said. The safety selector that controls the Crusader’s trigger has three settings: Peace, War and God Wills It. The weapon is the latest of more than dozen models sold at gun shops, ranging in cost from $960 to about $3,000.

The company would never produce an AR-15 assault rifle with verses from the Koran for Muslim marksmen, Thomas said. But it makes other special models including an AR-15 for women called “Pure Estrogen.”

“Our goal is not to offend or alienate good people,” said Thomas, referring to the reaction by CAIR-FL. “The difficult issues people have with each other need to be brought to the table. Often these are hurtful and painful but it’s important to be honest.”

Spike’s Tactical was founded in 2001 by Mike and Angela Register as a family-owned business. Originally a hobby, it now has more than 40 employees making enough components for enthusiasts to build about 10,000 custom rifles a year.