for the support of members of the African Caucus to raise funds to replenish the International Development Association (IDA). 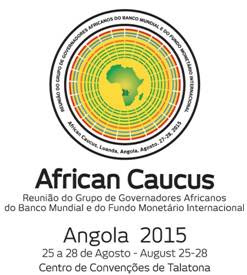 In order to finance development in an intelligent fashion, the WB needs to mobilise some US$135 thousand million in Official Development Assistance (ODA). This amount will attract and leverage new public and private investments.

“We have a large portfolio, a series of projects in preparation that will drive private investment. These are projects for which there is great demand and we are seeking to mobilise possible resources.

“There is the Ebola problem, floods in Malawi and the earthquake in Nepal as well, which is why the response budget for three years was already exhausted in the first year,” explained the World Bank VP in his presentation on the topic “Funding Options for ODA.”

The record ODA replenishment of US$52.1 thousand million aims to maximize impact on development by leveraging public and private resources, in addition to knowledge, with solid results and efficiency at a low cost.

The demand for regional projects in Africa remains large, and most resources are committed to regional infrastructure projects.

“The strong replenishment of ODA and financial innovations are crucial to fulfilling the agenda for transformation in Africa,” he concluded.

The position of the organisation’s Secretary is held by the Egyptian Minister of Finance.

Those taking part in the meeting of the Group of African Ministers of Finance and Governors of African Central Banks, affiliated with the IMF and the World Bank, reaffirmed their support for new funding initiatives.

Joseph Tucker of the International Monetary Fund presented the “Luanda Declaration” at the close of the African Caucus, speaking of the ways and means with which the Bretton Woods Institutions (BWIs) can support the challenges of financing for sustainable development, combating tax avoidance, eliminating the illicit flow of funds and strengthening Africa’s voice and representation in relation to the BWIs.

The Group stresses that a wealth of natural resources presents vast opportunities for development. On the other hand, they are aware that the countries that depend on oil for their export and tax revenues face unique challenges and remain highly vulnerable to the impact of various external disturbances.

The document reveals that the illicit flow of funds associated with aggressive tax avoidance, the repatriation of profits and debt repayments are tragically depriving [African] countries of hundreds of millions of dollars every year.

They are aware that the prospect of increasingly volatile financial markets means that it will be difficult to find resources to finance sustainable development goals (SDGs).

The document also states that Africa is concerned about the lack of well-conceived diversification strategies and that monitoring mechanisms are inadequate for Africa’s economic diversification.

The African Caucus proposes that the World Bank should support six regional transformative projects in the sectors of energy and agriculture, as well as a number of innovative solutions to reduce frequent funding gaps.

Indeed, the Group calls for financial contributions from the BWIs to the Africa50 initiative of the African Development Bank (ADB) in order to meet the challenges associated with initiating infrastructure projects.

At the next meeting of the IMF and the World Bank scheduled for the 13th to the 17th of October 2015 in Lima, Peru, the Chair of the African Caucus will pass to Benin.