The Supreme Court has brought the controversy involving the leadership of the All Progressives Grand Alliance (APGA) to an end, as the apex court affirmed Chief Edozie Njoku as the authentic National Chairman of the party.

Justice Mary Odili ended the controversy surrounding the national leadership of the party between Chief Edozie Njoku and Ozo Victor Oye in a letter dated November 7, 2022, to Edozie Njoku, who she addressed as “National Chairman, All Progressives Grand Alliance“.

In the letter entitled “RE: Request for A Clarification Letter as Regards to the 9th of May, 2022, Correction of Name by Your Lordship on the Supreme Court Appeal No: SC/CV/687/2021“, Justice Odili admitted an error whereby “the name of Chief Victor Oye was erroneously inserted instead of the name of Chief Edozie Njoku”.

She also ended the controversy on whether the Supreme court on May 8, 2022, sat to correct the judgement delivered on October 14, 2021 in which Oye’s name was expunged from the judgement and replaced with that of Chief Edozie Njoku.

Oye and his crew had been heard saying that the apex court never sat to correct the judgement of October 14, 2021, and that the corrected version in circulation was fake.

They went as far as petitioning the police and the Department of State Security (DSS) claiming that Njoku doctored the October 14, 2021 Supreme court judgement.

The agencies, however, sooner exonerated. Njoku after a thorough investigation.

A source claimed that Oye quickly bought over the Independent National Electoral Commission (INEC) and, deliberately ignoring the Supreme Court ruling, the electoral body continued to deal with Oye.

But the Supreme Court Justices who were members of the panel have come out through Justice Mary Odili to stop further controversy generated by the judgement the panel amended on May 8, 2022.

“It is to be placed on record that I corrected the mistake by replacing Chief Victor Oye’s name with that of Chief Edozie Njoku on paragraph 1, of page 13 of the 14th October, 2021 judgement.

Why we can not support Peter Obi – Dogara’s group

“The correction was made having cognizance that on the day of delivery of the judgement being 14th October 2021, by a slip of the pen and tongue the name of Chief Victor Oye was brought in. This error was pointed out to me by other members of the panel who reminded me that Chief Victor Oye was not a party to the Appeal or the proceedings which emanated from the Jigawa high court.

“However in the course of the trajectory of errors, the name of Chief Victor Oye kept recurring in the record of the judgement instead of the right party to the proceedings, Chief Edozie Njoku.”

Justice Mary Odili went further to invalidate the letter from Dr Festus Akande, the Director of Media Supreme Court and said the letter which denied all the CTCs of the amended judgement was an act of misconception.

Justice Mary Odili, therefore, reinstated Chief Edozie Njoku and removed the name of Victor Oye as a party to the suit, thereby ending every misconception, controversy and dispute on who is the authentic National Chairman of APGA. Read more.

See the attached letter below: 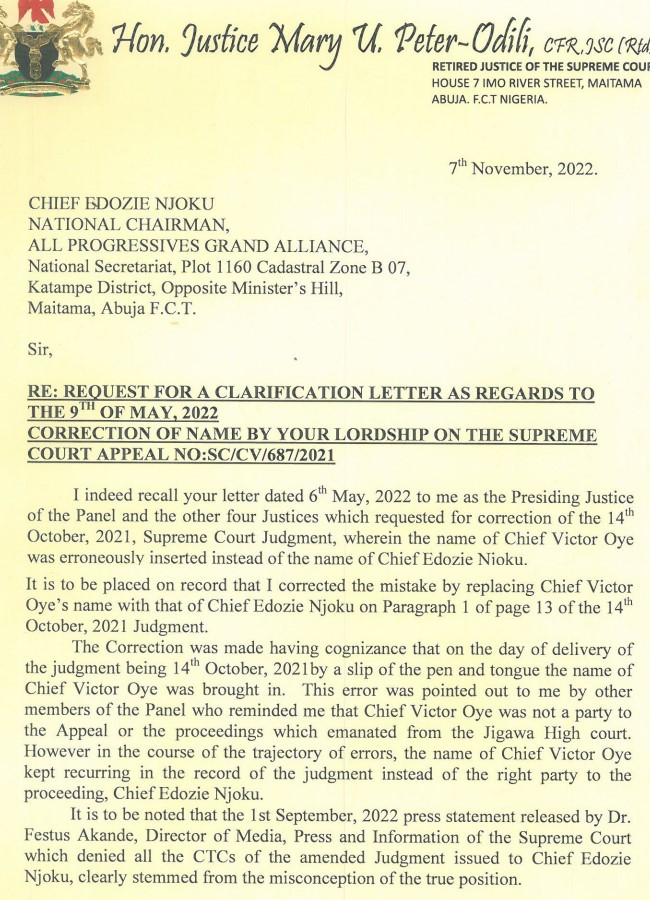 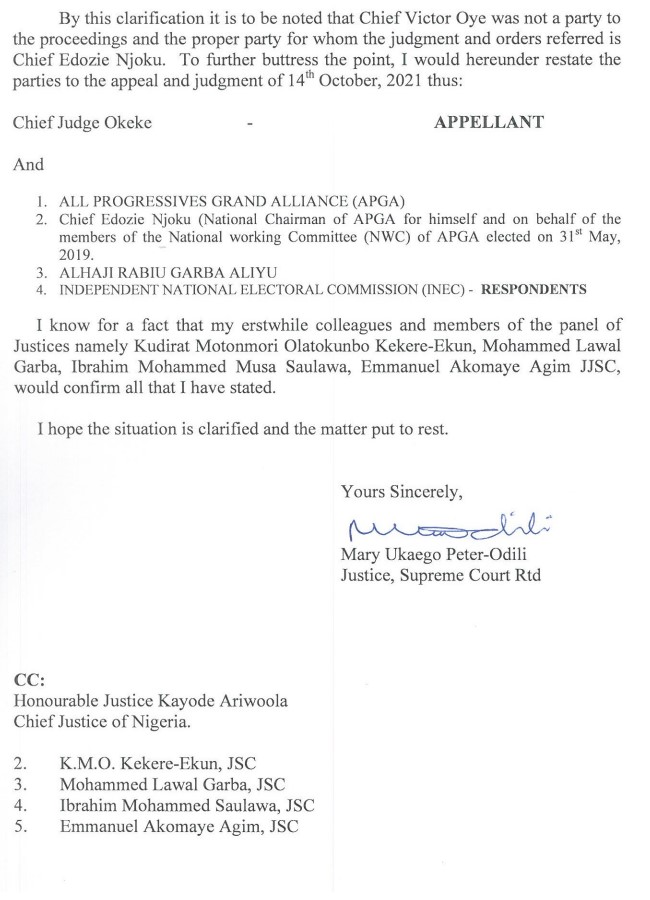 Why we can not support Peter Obi – Dogara’s group