On June 13, 2020, Alex Otti, former Group Managing Director of Diamond Bank, made a very widely circulated statement, confirming that indeed, HE Peter Obi saved over $155 million dollars in three different banks including his own Diamond Bank.

What shouldn’t have ever been in dispute but for the fact that Obi’s successor had other ideas about continuity and governance generally – all negative – became a protracted battle where HE Willie Obiano and his advisers engaged all manner of journeymen to attempt to deny the existence of such savings with ”near cash”, as one of the most floated coinages of public deceit.

But records don’t lie, especially one kept in banks. Besides, a prudent man like the presidential candidate of Labour Party, LP is never a man to make mistakes in financial figures. 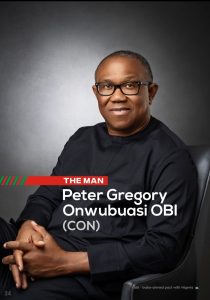 He is not called Mr. Prudence for nothing and many say that God created him from his mother’s womb solely to take very efficient care of public funds. This is evidently not far from the truth.

”Peter Obi is one of the few leaders of the country that has his head properly screwed on his shoulders,” Otti, had begun. After pouring the usual encomiums any progressive mind would on the man also called Okwute, Otti went to the meat.

”Like yours truly had done in the past, one can attest to the fact that some $155 million was invested in the tier two capital of three Nigerian banks with maturities of about 5 years at interest rates of up to 9% per annum to the credit of the State. As at the time the investments were made, the Naira equivalent of the funds was about N25b.

If those funds were rolled over at maturity in 2019, they would be worth about N62b today. If interest is assumed to remain at 9% for the past 6 years, an additional N33.5b would have accrued to bring the present value of the investments to over N95b. This is one of the advantages of prudence and financial literacy.”

For the uninitiated. Otti was the Group Managing Director of Diamond Bank when these savings were made. The astute banker made this calculation nearly two and half years ago. Imagine the present worth with Naira exchanging at over N800 today! We’ll certainly be talking of well over N200 billion!

In trying to justify his unbelievable mindset, the serving Delta State governor said that money that depreciate every day shouldn’t be saved for any reason. He was applauded by Senator Dino Melaye and other PDP hangers-on in the hall. Talk of impunity becoming an accepted way of life within the ranks of the old order!

Now, why did the former governor of Anambra State start saving in dollars? Yes, dollar is the safest currency to save in, especially if it is for long-term span. Inflation and devaluation hardly affect the all-powerful American currency while our own Naira ever suffers by steady devaluation against the international trading currency. So reasons Okwute saved in dollars is a no brainer actually.

The major question is – what project/s did the very foresighted ex-governor have in mind before taking up the task of saving in hard currency?

It truly was not to fight Coronavirus, even though a fraction of it would have been used to fight the pandemic without harming the main goal.

It was neither for road construction nor for building flyovers.

They were mainly for;

Obi and his team studied China’s model of industrial growth and decided to copy, then model to suit our environment and financial capability. Regional governments in China contributed immensely to China’s economic growth that lifted over 400 million people out of poverty within the 15 years of Millennium Development Goals, MDGs propelled model of governance.

Obi, who became a governor six years after the world had keyed into the MDGs, carefully started catch up with a well-structured Anambra Integrated Development Strategy, ANIDS, that developed all sectors simultaneously.

It was a huge success but he didn’t just stop there. He also started a saving culture where by 2025-30, Anambra State would have saved over a billion dollars. This money was designed to be used to spring up 1000 SMEs all over the state. This would be in partnership with willing Anambrarians as shareholders, with the state providing 50% of the share capital.

Imagine an Anambra with 1000 SMEs in full production! Imagine the jobs that would be created! Imagine the IGR for the state! Imagine that Anambra would hardly depend on Federal Revenue for robust development!

STEM stands for Science, Technology, Engineering and Mathematics. The $40 million loan was to have been accessed by his predecessor immediately he came into office to use to train Anambra youths in the STEM field to adequately prepare them for the planned industrial revolution in the state.

It would be of little gain to build industries only to employ Chinese to man them just because we lack adequately trained manpower. Besides, a United Nations study projected vacancy for over 20 million jobs in the field of modern technology by 2020. COVID-19 may have derailed that but Obi intended ndi Anambra to be part of that global workforce.

Again an interest-free loan of 60 million dollars was negotiated for Obiano’s assessment on take off to tackle all erosion problems in the state.

This total of $100 million dollars loan without any interest would have seamlessly been repaid from the dollar savings by 2025, while Anambra State would have been free of any erosion problem within two years of Obi’s successor…as well as having adequately trained up to about 100,000 Anambra youths in the new world order of STEM Education.

And Gov Obiano would have taken all the credit!

But with same mindset Okowa displayed, the man who succeeded Obi not only stopped a well-structured continuity but also he squandered the savings in inanities with bogus claims to justify extreme recklessness. The same mindset that landed Nigeria in the dungeon of using all our earnings to service debts.

We got to this pathetic level because those that borrowed did not lay down a workable plan of paying back the loans. They just borrowed for consumption, leaving a borrowing culture behind as our system of governance.

One man, with the discipline, principle and political will to stem the tide and rescue our future from a very destructive mindset, is being condemned by a candidate who PDP selected to be in the Presidency, who will in turn head the nation’s Economic Team.

Nigerian Youths, make sure you collect your PVC. It’s your future they are toying with. This is the time to take back your country. Otherwise, these members of the old order will leave you in a stage of total collapse.

This is an Editorial from PO Express Media, POEM.

Chukwudimma Aaron-Okonkwo is a native of Nza village in Ọzụbụlụ, Ekwusigo LGA of Anambra State, Nigeria. He is a complete and thorough Aba Brought-up.

An alumnus of the University of Ibadan (Animal Science), Chukwudimma is a foremost youth leader and a passionate advocate of transformative governance which are aimed at providing better social amenities that could benefit the common peoples living in the rural and under-developed communities.

He advocates for political participation of women and youths in every strata of government. He also champions the provisions of practical solutions to challenging issues bedeviling the society.

Disabled by an impaired hearing and speech impediment, he is determined to make huge impact in the world through his writings thereby proving that impossibility is nothing for the disabled.

He currently writes for News.Band, PO Express Media, G34 Media among others.

The painful truths about the Ekweremadu travails ~ by SKC Ogbonnia