The Onitsha headquarters of the Anglican Communion, Diocese on the Niger, has expressed bitterness over a trending video currently circulating in some media platforms “about a purported award to one Chidozie Nwagu, known in some circles as Akwa Okuko Tiwara aku n’Oba”.

In a letter dated Jan 17, 2023 signed by Venerable John Nkwoemezie, the Synod Secretary, the Church noted that the misleading trending video claimed that the so-called award took place in a hotel within the commercial city of Onitsha on January 13, 2023.

Refuting and denying any bearing with the award claims, the Church insisted that no such award took place in any of its parishes or by her priests whatsoever. This therefore makes the claims by the promoters of the mischievous and dubious video a calculated falsehood meant to demean and tarnish the image and integrity of the Diocese.

In the letter, copy of which was given to journalists in Awka this morning, the Church pointed out that “none of the ‘priests’ in the video belong to any parish of the Diocese. And that the robes of the priests were never those of the Church or her priests.”

The Secretary described the participants as “impostors with satanic ploys to destroy the highly cherished image of the Anglican Church and thereby embarrass the Church of God.

“This is again clear in their name as ‘Ebube Miracle’, without proper identity and parish”.

Asserting that the Diocese, her parishes and priests” are committed to Biblical Christianity and does not give awards or have any relationship with native doctors, herbalists and occultist people as seen in the video clip, the Secretary urged the public to disregard the video.

Referring to 3 John 9-11, the Church warned the public to be wary of the devices of the evil one, noting that the days are truly evil.

Moreover, the Director of Communications for the Diocese, Sir Oseloka Offor, told journalists that the legal directorate was still studying the matter with a view to seeking legal redress soon.

He cautioned the public to beware of deriding the highly revered Anglican Communion, or making any form of caricature of her name or her priests as such would be viewed seriously.

Updated: Some elements in Aso Rock working against Tinubu —…

Find attached the document below: 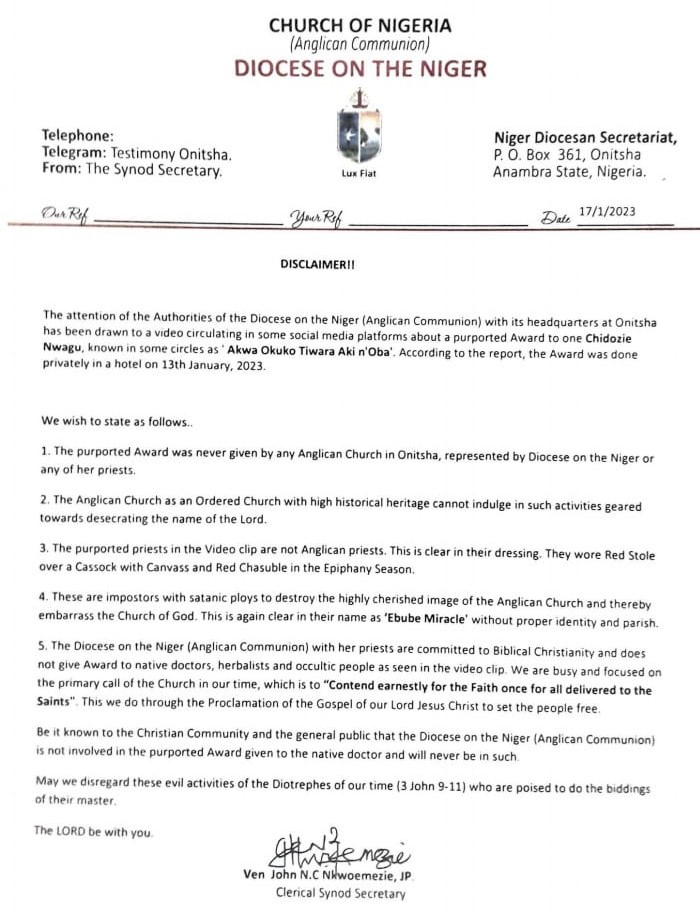 JUST IN: Ukraine interior minister, others die in helicopter crash

Army pension board caught in payment delay of debarment allowance