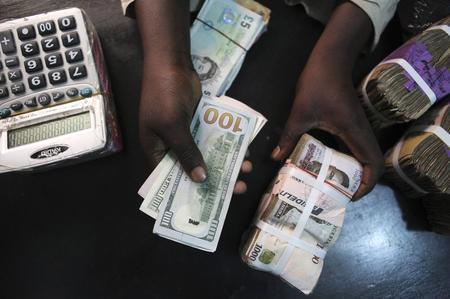 The Nigerian currency, the Naira, on Friday, appreciated to N208 to the Dollar in the parallel market, compared with N212 it traded for on Thursday.

The British Pound Sterling and the Euro also traded at N330 and N230, respectively, at the parallel market on Friday.

The official interbank exchange rate, however, remained at N197 to the Dollar.

A Wealth Manager, Olufukeje Adegbeye, attributed the fluctuation of the Naira to the global devaluation of the dollar and recent monetary policies of the Central Bank of Nigeria.

Mr. Adegbeye said in Lagos that the intervention of the CBN had stifled the forces of demand and supply in the nation’s currency market.

Mr. Adegbeye, who is also a currency trader, said that the interventions of the apex bank would have been gradual, to stem its impact on businesses.

“The businessman on the street should be taken into consideration. Some of our manufacturers still depend on the importation of raw materials for their operations.

“The policy on foreign exchange restriction has made life extremely difficult for manufacturers,’’ Mr. Adegbeye said.

He also said that the CBN, through its policies, has created avenues for the cross border smuggling of foreign currencies, especially the dollar.

Nigeria struggles with a government of “body language”