The Indigenous People of Biafra (IPOB) has been ranked on the 2022 Global Terrorism Index (GTI) alongside Boko Haram and the Islamic State of West African Province (ISWAP).

The recent evaluation followed the unprecedented number of mass killings in the south eastern region of Nigeria by persons believed to belong to IPOB and its militant arm, the Eastern Security Network (ESN).

The killings took an unprecedented dimension after the IPOB leader, Mazi Nnamdi Kanu, was renditioned from Kenya and detained by the Department of State Security (DSS) since about two years.

According to the GTI, total deaths from terrorism in Nigeria fell to 448 in 2021, the lowest level since 2011.

Terror-related casualties dropped by almost half compared with the previous year. However, the number of terrorist attacks increased by 49 per cent between 2020 and 2021. 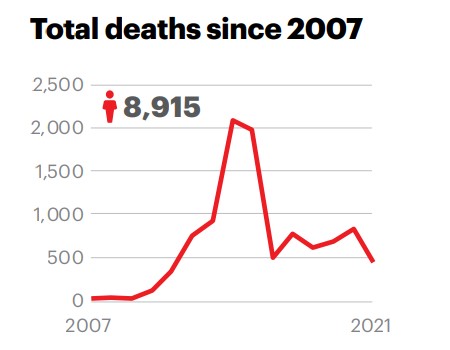 36 per cent of attacks were claimed by ISWAP, Boko Haram being responsible for eight per cent and 44 per cent not attributed to any group.

Law enforcement, including police and prison officers overtook both military and civilians as the most targeted group of 2021.

Attacks against police and prisons increased substantially from one recorded attack in 2020 to 75 in 2021, accounting for over a third of all attacks in Nigeria in 2021.

This was largely driven by an increase in clashes between law enforcement and separatist groups, such as the Indigenous People of Biafra (IPOB). Civilian deaths dropped 62 per cent from 2020.

Military deaths mirrored this trend, with 2021 recording almost half the number of terrorism deaths from the prior year. In 2020, ISWA became the deadliest terrorist group in Nigeria.

The decline of Boko Haram continued into 2021, with Boko Haram responsible for only 69 deaths, a decrease of 77 per cent from the previous year.

This is the lowest number of deaths by the group for a decade.

Boko Haram’s decline has resulted in a substantial improvement in terrorism in Borno State, which experienced a decrease of 71 per cent in terrorism deaths when compared with the prior year. 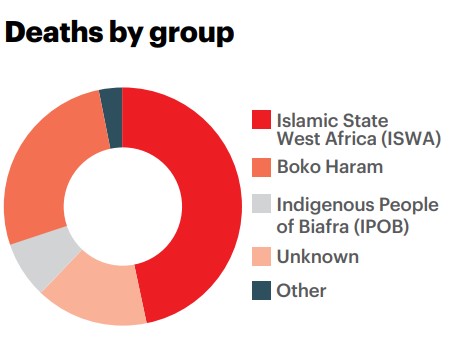 Attacks in the state also decreased from 121 to 86 respectively, a decrease of 30 per cent.

The state, however, remains the hardest hit region in Nigeria for terrorism, accounting for half of all terror-related deaths in 2021.

Boko Haram’s decline coincides with a number of factors, most significantly the death of the group’s leader, Abubakar Shekau.

Shekau reprtedly committed suicide by detonating an explosives vest during a confrontation with ISWA in May 2021.

Given the demise of their leader, Shekau’s followers were faced with the decision to either continue Shekau’s ideology or join ISWAP.

It has been reported that as many as 18 former Boko Haram commanders have joined ISWAP after Shekau’s death.

Attacks by ISWA as well as counter-terrorism efforts by the Nigerian government and foreign military forces have significantly ‘weakened Boko Haram’s impact in Nigeria.

These external pressures resulted in an increase in Boko Haram attacks in neighbouring countries, particularly Cameroon which recorded 37 attacks and 58 deaths in 2021. 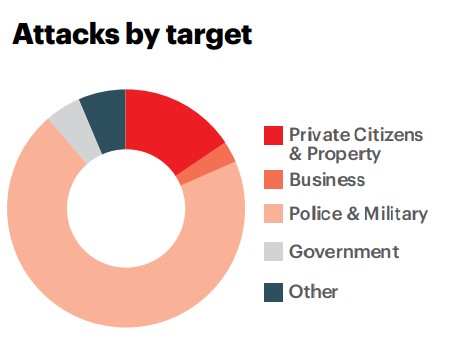 In 2021, ISWAP recorded their highest number of incidents and third highest death toll since 2017. Overall, ISWAP were responsible of 39 per cent of all attacks in Nigeria in 2021.

From The Archives: They fooled, used, humiliated & dumped you;…

ISWAP was responsible for Nigeria’s deadliest attack of 2021, with gunmen killing over 30 soldiers at an army base in the Borno region.

ISWAP’s main target continues to be military personnel, with the military being the target of over half of all attacks, resulting in 45 per cent of casualties attributed to the group in 2021.

Despite the civilian death toll decreasing, ISWAP continues to increase its attacks on civilians, from 11 in 2020 to 19 in 2021.

With the decline of Boko Haram in Nigeria and Shekau’s death, it is expected that ISWAP will continue to integrate surviving members of Shekau’s group, bolstering its fight against the Nigerian government’s counter-terrorism efforts.

What is the Global Terrorism Index?

The Global Terrorism Index (GTI) is a comprehensive study analysing the impact of terrorism for 163 countries covering 99.7 per cent of the world’s population.

The GTI report is produced by the Institute for Economics & Peace (IEP) using data from Terrorism Tracker and other sources.

The GTI produces a composite score so as to provide an ordinal ranking of countries on the impact of terrorism.

The GTI scores each country on a scale from 0 to 10; where 0 represents no impact from terrorism and 10 represents the highest measurable impact of terrorism.

Given the significant resources committed to counter terrorism by governments across the world, it is important to analyse and aggregate the available data to better understand its various properties.

One of the key aims of the GTI is to examine these trends.

It also aims to help inform a positive, practical debate about the future of terrorism and the required policy responses.

• Despite global terrorist attacks increasing to 5,226 in 2021, deaths declined slightly by 1.2%.
• The Ukraine conflict is likely to drive a rise in traditional and cyber terrorism, reversing previous improvements in the region.
• Terrorism in the West declined substantially, with attacks falling by 68%. The US recorded its lowest score since 2012.
• Sub-Saharan Africa accounted for 48% of global terrorism deaths.
• The Sahel is home to the world’s fastest growing and most-deadly terrorist groups.
• Islamic State (IS) replaces the Taliban as the world’s deadliest terror group in 2021, with 15 deaths per attack in Niger.
• Terrorism has become more concentrated, with 119 countries recording no deaths, the best result since 2007.
• In the West, politically motivated attacks overtook religious attacks, which declined by 82%. There were five times more political attacks than religious attacks.
• Terrorists are using more advanced technologies including drones, GPS systems and encrypted messaging services.

Trends from the 2020 Global Terrorism Index

– Deaths from terrorism are now 59% lower than their peak in 2014. The fall in deaths has been largest in Iraq, Syria and Nigeria.
– The overall fall in deaths from terrorism has also led to a reduction in the number of countries experiencing deaths from terrorism. In 2019, 63 countries recorded at least one death from terrorism, the lowest number since 2013.
– The impact of terrorism lessened in seven of the nine regions of the world in 2019.
– South Asia recorded the largest deterioration, followed by Central America and the Caribbean.
– However, Central America and the Caribbean remains the region with the lowest impact of terrorism, a position it has held for the past 17 years.
– MENA recorded the largest regional improvement for the second consecutive year. Deaths in MENA have fallen by 87% since 2016, reaching the lowest level since 2003.
– Afghanistan is the country most impact by terrorism in 2020.
– More recently, terrorist activity has been concentrated in South Asia and sub-Saharan Africa with both regions having recorded more terrorism deaths than MENA since 2018.

I got pregnant three times for Apostle Suleiman — Halima Abubakar

From The Archives: They fooled, used, humiliated & dumped you; will utterly…