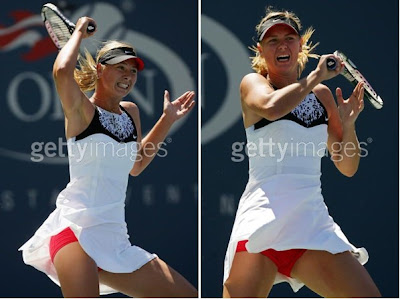 This year’s French Open ended in Paris on Sunday June 7, 2015. The indomitable Serena Williams bounced back from an initial scare of defeat to win the coveted women’s trophy while Stan Wawrinka claimed the men’s

title. The French Open is one of the Four Majors or Grand Slams tennis tournaments held every year. The other three are the US Open, Wimbledon and Australia Open. There are other annual tennis tournaments, which are also popular and hold very attractive rewards for the successful players.

As a tennis fan-both men and women-I have over the years wondered why female tennis players dress provocatively unlike their female soccer counterparts who dress decently. It appears that the organizers of the tennis tournaments all over the world have agreed to insist that all female tennis players must dress almost half naked otherwise they would not be allowed to participate. One would not be surprised if this was the truth; after all tennis is a white man’s sport, which originated from Europe. The overriding consideration is the organizers’ profit.

All the ladies of tennis dress provocatively. Serena Williams of the United States of America personifies it. In the days of Monica Seles, she was also determined to show off everything under her skirt. Maria Sharapova is no exception. There are several others including the girl Miss Williams defeated at the last French Open in Paris. A lady who exposes her underwear for all to see is not normal. Underwear, as the names shows, is not meant for all eyes; otherwise, it should have been given a different name. Under normal circumstances, a woman who sits down inappropriately and exposes her nakedness quickly corrects it once she realizes it. I recall how Ezinne, in Achebe’s Things Fall Apart, was reprimanded by her father, Okonkwo when she sat like her brothers, even though she was a little girl. “Sit like a woman,” her father corrected her. Indeed, it is abnormal for a woman to sit down like a man, unless she is wearing trousers or shorts. Society expects every woman to sit down appropriately.

How can a father sit and watch his daughter’s nakedness? In Africa, it is not the practice. It is an abomination. That is why a medical doctor cannot deliver his daughter of a baby. Nor would a man deliver his sister of a baby. It is not morally acceptable. Therefore, when a man sits watching while his daughter chases the ball all over the court half naked, something has gone wrong somewhere.

Men are responsible for female tennis players’ riotous dressing on tennis courts. They sit down and enjoy seeing the female tennis players’ nakedness when the young girls run around the court chasing the ball. The organizers want maximum patronage and attendance at the tournaments, so that more and more tickets could be sold to enhance their profit. The situation is comparable to the production and sale of entertainment magazines. In the United States, girls make cover of the magazines based on their sale’s value. For instance, girls like Jennifer Lopez, Rihanna, Lady Gaga, Beyoncé, etc., who can bare it all, are regular magazine cover girls. Their appearances help to market the magazines. On the other hand, conservative Christian/Muslim girls do not make magazine covers because their sales’ value is insignificant.

Steffi Graff was one female tennis player who refused to expose her nakedness for any man to feast his eyes on. She had her tennis skirts sewn in such a way that as she chased the ball on the court, her nakedness was never exposed, even if she fell down. This could not be said of Serena Williams whose on the court dressing is very, very, provocative and indecent. I do not understand what is in her mind. Does she think that other ladies do not possess what she wants the spectators to see? I do not think that beauty is in the backside. The revelation that we see of female tennis players is what only married couples are expected to share together.  I am surprised that Mr. Williams stands by and watch his daughter jump around in the court half naked. This is abomination.

I am not totally surprised with what we see on tennis courts these days. If a man can marry a man and a woman another woman and the state recognizes and protects as well as promotes it, what is the big deal about a lady going half naked in public? After all, it is her human right to dress in any manner of her choice.

But let us not forget one important point, which seems to be lost on women: female tennis players are being made cheap by men who encourage them to dress indecently. Their womanhood is being demeaned and they pretend not to know it. I cannot remember any time anywhere Steffi Graff was stopped from playing in her hey days because she did not dress to entertain evil men. And she was as graceful as a dove while she took trophy after trophy. She reigned for several years and remains the idol of many fans.

The body that regulates tennis tournaments should step in and define what is acceptable for female tennis players to wear. The conduct of tennis tournaments ought to be governed by rules, which all participants must respect. Those who are not interested or are unwilling to abide by the rules should not be allowed to participate.

But where are the women rights activists, if I may ask? Where are you? Or, is it that you do not see anything wrong with what is going on? You have been grossly ineffective on the fight against this exploitation of women. Wearing short flayed skirts to appear on tennis courts is not the way for young girls to enjoy their human rights. Men, including, surprisingly their fathers are enjoying seeing their underwear. This has nothing to do with allowing the young girls the right to choose what they like. This is purely exploitation of women by men.

Serena Williams should rethink her dressing and acknowledge that she is a woman and not a man. I admire her determination and drive but I am appalled by her dressing. It is inappropriate. All other female tennis players who emulate Serena stand condemned for on court indecent dressing.

I remain always yours without rancour.