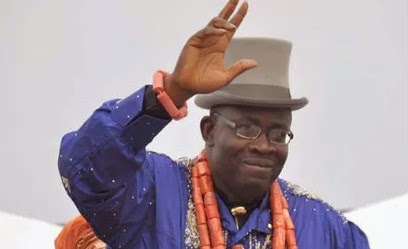 South geo-political zone are among dignitaries that will attend the September 8 declaration of Bayelsa State governor, Henry Seriake Dickson [image above].

Others expected at the event include the national leadership of Peoples Democratic Party (PDP), all PDP governors and former First Lady, Dame Patience Jonathan.

Already, the ex-First Lady has announced her decision to reconcile with Dickson and had directed all her loyalists in to work selflessly for the PDP and ensure his re-election.

A statement issued on Wednesday in Yenagoa Chief Press Secretary to the governor, Daniel Iworiso-Markson explained that Dickson is seeking re-election based on his achievements and track records.

“His Excellency, Country Man Governor, came into office as a reformer with a bold vision encapsulated in the Restoration Agenda as a springboard of a paradigm shift in all areas of governance in the state”, he said.

According to him, Dickson’s focus and achievements till date include the following:

•      Birthed an enduring peace and tranquility through modern security architecture, thus banishing the inherited huge insecurity in the state.

•      Declared state of emergency in education, leading to a revolution in the sector: free and compulsory education, built 250 schools, boarding facilities in the 3 senatorial districts, motivation of teachers, scholarships locally and abroad, payment of WAEC, NECO, JAMB fees unfailingly till date. From the inherited low level of performance, Bayelsa now ranks among the top 10 brackets in national scores.

•      Turned Bayelsa State into a huge construction site: construction of quality roads and bridges and flyovers from the state capital, Yenagoa and across the state, built several public buildings and those of institutions, thereby opening up the state. People can now drive to Nembe (a prominent town but inaccessible by road) 45 years after it was first proposed.

•      The cargo and passenger airport at Amassoma is now 60 per cent completed.

•      Economic diversification: shifting dependence on oil and gas to agriculture and tourism. The ambitious Eco-park, Power generation plants and light manufacturing projects at Gbaranmotu and the Agge Deep Seaport are steps towards the industrialization of the state.

•      Established the Bayelsa Development and Investment Corporation (BIDC) as enabler of investment activities in the state. BIDC is now in excess of N25 billion in consolidated assets with offices in Johannesburg and London.

•      Human capital development through training and empowerment, promotion of SMEs among the people.

•      The once dreaded image of Bayelsa State has been replaced with a peaceful and welcoming one: hosted several high profile conferences and events including the Jaz fiesta, the Most Beaufiful Girl in Nigeria pageant, the Africa Movie Academy Awards, the recent 2015 Nigerian Guild of Editors conference and many more.

•      Bayelsa State is undergoing a major re-orientation in societal rebirth, placing emphasis on ethics and values of regeneration.

•      Modernization of health facilities across the state.

•      A world class diagnostic centre was also built for timely detection and treatment of all kinds of ailments.

•      Modernized transportation by replacing motorcycles with the Restoration Cabs in the state capital.

•      Regular payment of workers’ salary till date. The recently disbursed N338 billion loans among the states is a pointer to the shrewd management of state resources as only N1.285 billion was allocated to Bayelsa State.

•      In the last three and half years, Governor Seriake Dickson has made a huge difference in the lives of the people, kept faith with the basic elements of the Restoration Agenda and his vision of a new Bayelsa State is crystalizing into bold realities and why his re-election can only be for the greater good of the people.

An exceedingly brilliant man and visionary, Governor Dickson belongs to a new generation of political leaders driven by great ideals and robust democratic credentials. The core of his conviction kind of politics is the knack for proffering strategic solutions to issues of development to make life more abundant because he believes the essence of government is the betterment and happiness of the people.