Chief Njoku made the remarks in a press release he personally signed, dated January 20, 2023, and issued in Abuja.

The APGA National Chairman, referred to a letter signed by the Chief Registrar of the Supreme Court, Hajo Sarki Bello, Esq., on behalf of the Chief Justice Of Nigeria, dated 19th January, 2023.

In the letter, Bello addressed Njoku as the National Chairman of APGA and advised him on the procedures to gain legal recognition and assume full leadership of the party.

He advised Njoku to bring an application pursuant to Order 8, Rule 16, of the Rules of the Supreme Court seeking to correct the accidental slip in “the judgment (in which the name of Chief Victor Oye was erroneously mentioned instead of Chief Edozie Njoku), the actual suspended Chairman of the All Progressives Grand Alliance (APGA)”.

See a copy of the letter below: 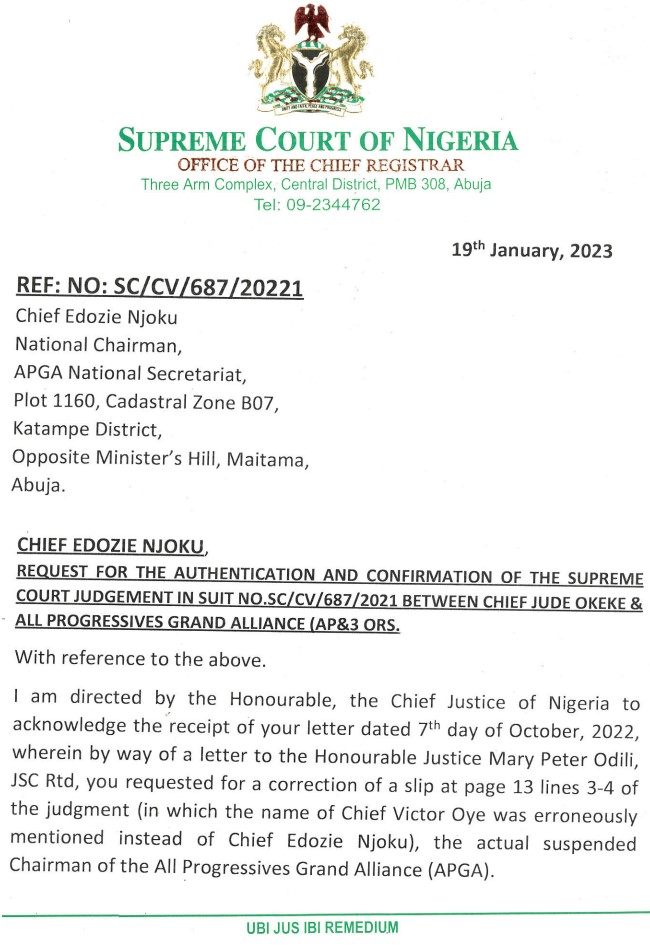 Reacting to the letter, Chief Njoku, in the statement entitled “Supreme Court letter has reaffirmed me as the authentic National Chairman of APGA“, said that the letter has laid to rest the APGA leadership tussle.

He noted that the Supreme Court has vindicated him after he ‘paid a heavy price for this, including his name being dragged to the mud’.

He stated: “Today is a crucial day in the history of our great Party, APGA. It will go down as a day that the Nigerian Judiciary proved itself as the last hope of the average citizen.

“By laying to rest the APGA leadership tussle, the Supreme Court has proven that the frames of a solid democracy is built on justice, equity and fairness.

“Perhaps, no suit has generated confusion like Suit No: SC/CV/687/2021, wherein the Supreme Court on October 14, 2021 stated that my removal as the National Chairman of APGA at Jigawa High Court was illegal and not justiciable.

“Unfortunately, while delivering the Judgment, the Court erroneously inserted Chief Victor Oye’s name where mine was meant to be.

“Regrettably, I have paid a heavy price for this, including my name being dragged to the mud.”

According to him, the former chairman, Chief Victor Oye, and his sponsors capitalized on Court’s slip of pen and tongue in the Judgment and mounted undue pressure on the Judiciary, INEC and Police and declared the CTCs of the Judgment and Enrolment Order he received as fake.

“Amidst this confusion, we wrote a letter to the Supreme Court on October 7, 2022, with the caption: “Request For The Authentication And Confirmation Of The Supreme Court Judgment In Suit No: Sc/Cv/687/2021 Between Chief Jude Okeke & All Progressives Grand Alliance”, in which the letter was addressed to the Chief Justice of Nigeria, Chief Olukayode Ariwoola.

“Still not satisfied, Oye and his sponsors went on to allege that Odili’s letter was also forged.

“The brazenness, boldness and audacity of Oye and his sponsors by trying to suppress a Supreme Court Judgment will remain a case study in the pursuit of justice in Nigeria,” he stressed.

He, meanwhile, thanked the Chief Justice of Nigeria, Justice Olukayode Ariwoola and other eminent Apex Court Justices for preventing attempts by desperate politicians to put Nigeria’s judiciary to shame and ridicule.

“By its letter dated January 19, 2023, the Supreme Court has settled the matter by acknowledging Suit No: SC/CV/687/2021, which was the Suit I instituted against Chief Jude Okeke against the Jigawa Judgment as the National Chairman that was wrongfully removed from office.

“But, the desperation of some overzealous politicians, led by Chief Victor Oye, who was not party to the suit took a deadly toll on the matter.

“We hope that in the coming days APGA would take its rightful place and participate in the general elections as the legendary third force in Nigeria’s politics.

“Observably, the letter from the Supreme Court has absolved my National Working Committee (NWC) and myself from all allegations of forgery.

“It has also proven beyond all reasonable doubt that the corrected judgment of May 9, 2022 truly exists,” he added.

Njoku promised to comply with the directive of the Court by filing a motion for the regularization of the correction in line with Order 8 Rule 16 of the Supreme Court.

He also urged all APGA faithful to remain steadfast, patient, dogged and sustain their faith in APGA, as the party is on the course to a total renewal.

He further commended all party members, men and women of goodwill, CSOs, the Nigerian Bar Association and the Nigerian Youths that have shown keen interest in the course of this battle to ensure that justice is done.

He stated that all party candidates irrespective of the primaries they partook in met all INEC requirements as stipulated by the law and enjoined them to come forward and work out with him a favourable harmonisation that will ensure the party win more seats at all levels in the coming election. Read more.