A Pariah Speaks: I desire to unite S-East govs – Okorocha 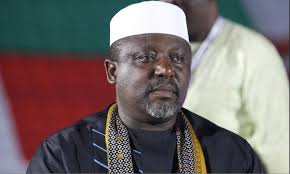 “As the only APC governor in the South East, I cannot do it alone and I cannot also play the attendant politics of establishing a very strong relationship between

the South East governors and the APC-led Federal Government alone.  Hence, every governor and leader in the South East must be carried along in the whole thing,” Okorocha said. – http://www.vanguardngr.com/2015/08/i-desire-to-unite-s-east-govs-okorocha/

Mallam or should I say Alhaji Okorocha, the surreptitious Moslem convert who having refused to condemn the daily and constant humiliation, marginalization and massacre of his so-called Igbo brethren by the born-to-rule; the so-called Igbo who having sold his soul to the Fulani even as he continues to seek ways to help them actualize the vision of the priest Fodio, remains true to form. It is of import we remind him of the vision he seems so oblivious to and willing to impose on his brethren.

The quote below from a previous write-up ‘Before ISIS or ISIL was Nigeria ‘British Birthed Born-to-rule’ Terrorists’ by this writer, speaks for itself.

“Obviously, the born-to-rule dogged embrace of the current totally undemocratic polity biased in their favor, a deliberately imposed form, many thanks to the British government; and their refusal to allow or support the restructuring of Nigeria to equitably reflect the recognition of all nationalities (many in the North) as part of the polity will continue as the undoing of both their plot and that of their partner in crime, the British government. That they still labor under the false impression and misconception that they can seize power by intimidation, anarchy and mayhem or through the barrel of a gun is not surprising. Neither surprising is their belief in the outdated strategy of their Spiritual leader, the Sardauna of Sokoto, Alhaji Sir Ahmadu Bello (1909-1966), the belief that Nigeria is their conquered territory to do with as they see fit; leading, of course, to the continuing total, unchallenged and unquestioned domination, pillaging and looting of Nigeria.

The above irrational belief is traceable to the vision, below, of their priest Fodio, of which the British government were well aware of even as they were  determined to use it as a weapon against the ungrateful Nigeria ethnic nationalities especially the uppity Igbo.

“In this apparition Fodie was informed that the whole of that beautiful country around them, with all its populous towns and countless villages, belonged to the believers in the prophet, to wit the Phula; and that it was Fodie’s divine commission, with the help of the faithful, to wrest all those flowery plains, fruitful hill, and those lovely valleys, from the hand of the Kafirs, and then to bring all the Kafirs into subjection to the Islam, and to devote to the sword everyone who refused to believe.” – West African Countries and Peoples [James Africanus Horton (1868)”]

Mallam Okorocha should stop speaking out of both sides of his mouth and heed the advice of Maazi Nwaorgu (Dr.), the Secretary General of Ohanaeze, to one-Nigerians rather than seek to confuse and trick Igbo governors into embracing his cowardly and selfish stance!

“According to Dr. Nwaorgu, Igbo are not against Buhari, stressing that, having won the election, he is now the president of all. “Electioneering is over and Buhari is the president of everybody and all Nigerians must co-operate with him to succeed.

“It is a fact that we voted for Jonathan, but that is electioneer­ing. It has come and gone. Buhari is president of Nigeria. Electioneering is gone, governance started on May 29. Governance is different from electioneering. When he was run­ning for president, he was an APC person and now president for all of us.

“So, if people of Junaid Moham­med’s ilk are still practising outdat­ed politics, they can remain at that level. Every Nigerian is free to air his opinion.

“Ezeife aired his opinion from his own perspective and experience. Junaid’s response is at best acerbic and it is out of tune. It is out of tune with cooperation and reconciliation.

“No true Nigerian, who believes in unity, will throw up such non­sense as Junaid Mohammed did. He was playing to tribal gallery for him to still be seen as somebody cham­pioning a non-existent cause.

“Such trash should be ignored while we strive hard for unity in Nigeria. Buhari is our president and nobody can corner him unto himself or to his tribe.” – http://www.thefocusng.com/you-are-surrounded-by-corrupt-people-ohanaeze-tells-buhari/

In case Mallam Okorocha remains dense as to the tune of the write-up, the quote below from a true Igbo patriot should present clarity.

“How many Igbos have called the shots when it comes to rulership in this nation? All these years, the Igbos are being treated as visitors in this nation.  And we are saying, if we should not be given our deserved place in a nation we are reckoned with as a major ethnic group, then leave us to go our way. The Igbo position has to be settled in this nation. Equity demands that we be given our deserved position in the affairs of the country Nigeria. Or are we visitors in Nigeria?”

2007 Presidency: What Ndigbo Must Do Now, by Ozobo

Groveling before the born-to-rule while embracing a path of dishonor will not endear him to the Igbo – TUFIAKWA!

“I have run Ohanaeze at a time the Northern governors agreed with me that we meet once every year. Nineteen of them then agreed that an Igbo man must be President of this country. I don’t trust them and I have reasons not to trust them. They promised Alex Ekwueme that he was going to be President of this country, when the time came for them to fulfill that, Ekwueme was pushed out and they brought in Shehu Shagari. They did it second time with the Late M.K.O Abiola. In politics, the Northerners are like mechanics, they will break your car, put it up for you to manage after a while you will be forced to return to them to fix the car again. I told our Abuja people not to bother going to the North because they have failed to keep promises they made in the past and you can continue meeting with them. General Ibrahim Babangida sent some people to meet me. I told them that we would not try the North again. Two weeks later, Atiku Abubakar came here himself and talked to me about how we can help them, I told him that I don’t know how we can help them. I told him that I cannot guarantee our help. I gave him a proverb of the Igbo that a neighbour is better than a brother in the farm (agbata obi ka nwa nne di n’ugbo)

After that our brother in Abuja came and said that after the war Igbo property in the Port Harcourt and Bayelsa were declared abandoned properties. And I asked them would you compare the declaration of Igbo properties as abandoned properties with pogrom? They said No. And I said, if you are alive, you can get your property back from the man who is illegally occupying it, but if you are killed you can’t do it. Reports about the killing of Igbos by the North has it that about 2 million Igbo people were killed by the North.

I asked them, you talk about people taking our properties, was Jonathan an adult during the war? Was his father one of those who took our properties? If we come together as one, we can negotiate for properties now, but we can never negotiate the killing of our people. Some of these people were not there when our people were killed in the North. I was a Minister then, we go to receive bodies of massacred Igbos in the North at the airport and railway station. These Northerners were so heartless and wicked that after killing a pregnant woman, they will use their knife open her belly, remove the baby there and killed the baby too. After doing all these, they will send the corpses of the Igbos they killed back to us in Igboland for burial. And some of the people who ordered this pogrom are still alive today, coming to us to help them become president now. Have we ourselves been President like them? Don’t we want to be President? One thing the North has always done is when an issue comes up among the Igbos, the North will sponsor one of us who will come to create trouble here. Why must we allow ourselves to be used against our own interest by those who hate us?”

I salute members of all ethnic nationalities that continuously stand unshakable on truth.

Oha Ka (The People are Supreme)

Between Ibrahim Lamorde and Natural Justice

Okorocha and his habits: Yes it is true (pt. 2)