Popular internet search engine, Google, in its recent statistics, revealed that the presidential candidate of the All Progressives Party, Bola Tinubu, and his deputy, Kashim Shettima, are among the most searched individuals in the last month.

Noting that trends data demonstrates search interest in a subject or person, via its google trend section, it was, however, stated that the information is not used to predict voting behaviours among the electorate.

In its data analysis tagged, “On February 25, 2023, Nigeria will elect its next president,” the APC presidential candidate, being the highest searched individual against his opposition, had a 42 per cent search rating.

Moreso, his running mate, Kashim Shettima, also ranked top on the search engine as regards the forthcoming election. Among his peers as vice presidential candidates, Shettima ranks high with a search percentage of 38 per cent. 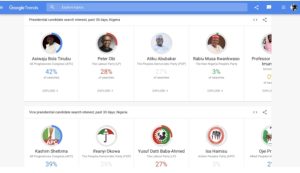 Updated: Some elements in Aso Rock working against Tinubu —…

Based on its findings, Google reports that both Obi and his vice presidential candidate had 28 per cent searches on its site.

In third place was the Peoples Democratic Party’s presidential candidate, Atiku Abubakar, and his running mate, Ifeanyi Okowa. They both polled 27 per cent of searches on the site.

Meanwhile, Rabiu Kwankwaso had only 3 per cent of searches on the site, according to the statistics based on the 2023 elections.